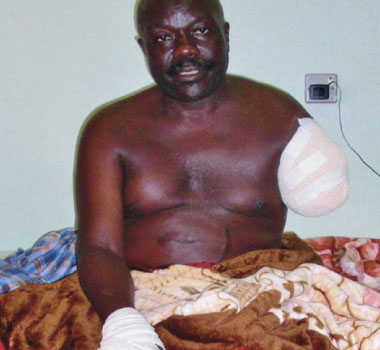 As a Principal Medical Officer with the Uganda Blood Transfusion Services (UBTS), I have devoted years of my life to collecting blood donations to save lives but never dreamed that I would become one of the tens of thousands of people that UBTS saves each year. UBTS is a national agency mandated to distribute blood collected from voluntary non-remunerated donors to all hospitals free of charge. But for three blood transfusions, one operation and seven strangers who gave their blood to save a life, I would not be here to tell my story.

In February 2012, I travelled to Kampala from where I live in Arua, the main city of the West Nile Region in north-west Uganda, situated next to the Democratic Republic of Congo and South Sudan, for official work with UBTS. Afterwards, I decided to visit Hoima in western Uganda as it is relatively close to the capital. My wife worked in the hospital there and I thought it would be a good opportunity to spend Valentine’s Day together.

After a lovely day and evening, I woke at 5:00am to prepare for the 500km journey by bus back to Arua. Public buses to the West Nile region are poorly maintained, with drivers who often have no respect for the road conditions or the speed limit. On this occasion, I was especially unlucky – halfway through the journey, the driver dozed off and lost control. The bus overturned.

There was panic everywhere, and injured passengers; people were screaming. I felt numbness in my left arm, followed by excruciating pain. Looking down, my entire arm was covered in blood.

I forced my way out of the wreckage into the open. In the light, I could see that a major blood vessel had been completely severed. My arm was gushing blood and, despite being a doctor, I knew there was little I could do at the side of the road.

The bus-conductor tore a piece of my shirt and tied it as a tourniquet to try to stem the bleeding. It helped a little, but soon I started to feel dizzy. I had already lost about three litres of blood since the crash, equal to half of my total blood supply. I thought I was going to die.

Then the unbelievable happened, as a police patrol vehicle arrived at the scene of the crash. The lack of an adequate emergency response service in Uganda meant we had assumed ourselves unlikely to receive any help. The most seriously hurt were taken straight to the nearest local hospital by the police.

Blood, which is usually rare, was available in that remote local hospital in the sugarcane plantations. I was transfused immediately but the hospital was ill-equipped to deal with severe injuries, and I was sent to the closest large medical facility, Hoima Regional Referral Hospital, for treatment. All I could think about was the fact that my wife was working there.

We drove to Hoima at break-neck speed and arrived to find my wife on duty. However, on seeing my injuries, she was too shocked to attend to me. A colleague on leave responded immediately and I was taken to theatre where the bleeding was finally arrested. However, by this time, I had again lost too much blood and needed another transfusion.

However, there was no blood available, something which is all too common, even in the largest hospitals. My boss at UBTS immediately dispatched a team to evacuate me to Mulago National Referral Hospital in Kampala. The Mulago team collected blood from Kiboga hospital, en route from Kampala to Hoima. It was this blood that eventually helped me make it to Mulago as I was transfused along the way.

We arrived at Mulago, the largest hospital in Uganda, about 15 hours after the accident. That night, the only treatment I received was an Xray, which showed large pieces of glass deep in my arm which would need to be surgically removed.

The following day, I was taken to theatre where the glass was taken out, but I had received surgery too late. Parts of my wound started rotting on the third day, as my lower arm furthest from the wound started dying. As my arm rotted, I started noticing features of kidney failure. One of the senior house officers at the surgical ward confirmed my fears and warned me of the dangers ahead.

The only way to save my life was to amputate my arm as soon as possible, to prevent the necrosis from spreading. However, by the time I was ready for theatre, Mulago had run out of blood, meaning I could not undergo the amputation due to the risks of it taking place without transfusion.

The Nakasero blood bank, headquarters of UBTS, came to my rescue, telling me that blood was available for collection. Eventually someone was found to collect the blood and my operation went ahead.

Despite these difficulties, I received blood, and my operation was a success – losing my arm to save my life. If it had not been for the seven people who had donated, I would have died. Many people are not so lucky, and suffer through accidents, childbirth, and malaria only to die from lack of blood. These deaths are preventable – greater numbers of donors would lead to a significant reduction in deaths.

Since my accident and recovery, I have returned to my work with renewed dedication. Uganda still lacks a sufficient supply of safe blood but my team and I work tirelessly to provide enough for the hospitals in our region. Serious road traffic accidents such as mine occur frequently

in Uganda. Malaria is all too common across the country, especially in West Nile region in the north-west, and if untreated it causes severe. anaemia, requiring a blood transfusion. About half of all blood in Uganda is used to treat children with malaria. Women are also major recipients of blood – before, during and after childbirth in particular. I therefore call on all Ugandans to donate blood today – you never know when it will be your child, or your mother or wife, or even yourself, who needs blood, so act now to save a life.