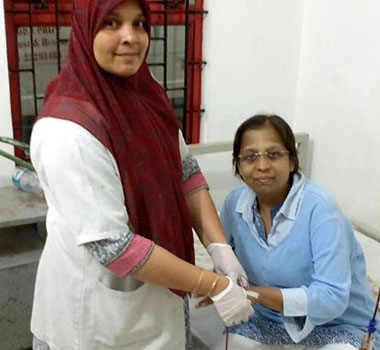 In a hospital in India, I lie still as I go through a venipuncture for a blood transfusion. I watch as the needle enters my vein and blood rushes into the scalp vein set. I watch as I am hooked to the packet of blood that screams “B+ve.” This is a familiar routine each month since the age of four. I am now well into my thirties and this routine blood transfusion is my lifeline. My passport to a living. I have a genetic blood disorder called Thalassemia and my life depends on this lifeline of blood transfusions.

Call it fate, call it bad luck, misfortune, my life is a result of the game played by my familial genes and ancestry. I call it the trickery of delta and beta because of my delta-beta Thalassemia variant. Delta and beta played a cruel game with me. The globin gene supposed to produce sufficient hemoglobin to carry on life activities has a mutation preventing the production of normal hemoglobin.

My life has always revolved around blood. Either I am giving blood for lab tests or taking blood transfusions. The test tube with blood and the IV line are symbolic of my struggles with this blood disorder. As a child, I hated the sight of blood and didn’t want to look at it. I always looked away as I was being pricked and I never wanted to look at the blood packets. Soon I realized that I must make friends with my enemies if I have to live better and stay Namitha Kumar receives one of her regular, live-saving blood transfusions; her transfusion nurse Sameena Mariam in attendance. Only when this photograph was taken and the explanation for it given did Namitha and Sameena realise that they had both submitted stories and – respectively – won first and second prizes! positive. I started accepting that blood will be the fulcrum of my life till there is a therapeutic cure. I accepted the play of delta, beta and the globin gene games. I said “Hi” to Thalassemia and finally invited the rogue home. I realized that I have to pacify the enemy if I have to continue living and have a fairly decent life. After all life is not just about blood games but much more. In the midst of running circles over blood, I got an education, made friends, had fun and did everything that any normal human did.

I learnt to listen to the whispers and stories of delta, beta and the globin gene. I picked up early warning signs when things were not going well. Sometimes I pleaded with them to leave me in peace and let me be like any other normal person. Sometimes they left me alone and disasters were averted. At other times, disasters descended like angry, storm clouds. In such times, blood became the center of everything as a minor interruption would result in rapid hemolysis. I was left hanging on to packet after packet of blood as delta, beta and the globin gene waged a nuclear war in my body. There were times when I didn’t know if I was alive or dead. I clung on to life hoping that the blood games would cease and let up. And truly it did. After the war abated, I was back to the driving seat of life in full control. Blood had played its games but it also saved the day as I always got enough transfusions to pull me through the several interruptions.

Life goes on it all its complexities yet I continue to see the beauty and thrill that it offers me. I am tied to blood always. My life timetable revolves around taking blood transfusions. Planning a transfusion, being prepared for emergencies and taking on everything that comes by – good or bad. I am hopeful that gene therapy will bring succour to the lives of all those with blood disorders like mine.

My identity is not just a clinical or medicalized one but a richer, deeper and more meaningful concept going beyond any genes. I learnt to live life for whatever it offers me and I am happy to be a part of this colorful world.

I know nobody is immortal, so as I lie dying someday…

Let me not be filled with regrets. Let my memories fill me with pleasure and happiness on the various thrills I experienced in this world. Let me leave happily and at peace that I took the best and enjoyed what I could.”